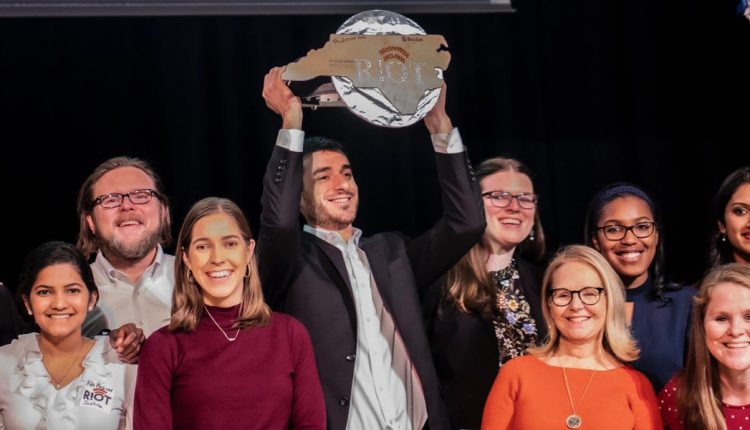 In July, six teams will share their ideas on how augmented reality can help solve some of the challenges facing Raleigh, North Carolina and the surrounding areas.

As part of the RIoT Your Reality program, teams are exploring ways to improve diversity, inclusion, and accessibility in city programs, encourage human resource development, and redesign the Raleigh Convention Center to fuel economic development.


“It’s the interface with government,” Tom Snyder, executive director at RIoT, a local nonprofit committed to promoting innovation, told Insider. “The City of Raleigh and the City of Cary have come up with a number of issues they are looking for help with. And we’re running a challenge where people are prototyping augmented reality applications to meet those challenges.”

RIoT Your Reality is a partnership with RIoT, the City of Raleigh, the City of Cary, Google Fiber, US Ignite, and Facebook Reality Labs. It started in April with several teams presenting their AR ideas. Six have been selected to receive $ 1,000 to build a prototype that they will demonstrate during an event on July 27th. One final winner will receive $ 40,000 and a spot in the RIoT Accelerator program to create a new startup.

Snyder said the goal is to create a community pilot and learn how to scale a startup to support cities outside of North Carolina.

The AR competition is just one of the ways RIoT is driving innovation and entrepreneurship in the Raleigh area. Here is a look at some of the organization’s other great programs.

RIoT was founded in 2014 as part of the larger nonprofit Wireless Research Center in Wake Forest, North Carolina that works to drive innovation in wireless technology.

“Our core tenet is that the best new jobs are created at the forefront of new technology,” said Snyder, who co-founded the organization. RIoT’s programs help entrepreneurs start businesses and established businesses grow through the introduction of new technologies, thereby creating new jobs.

“There are just huge industries here and a really nice balance that makes it more appealing to people,” said Snyder. “During your career you can not only do a job hop, but also a successful industry hop. And that brings fresh ideas and really makes us a strong place to live. “

RIoT has another location in Wilson, North Carolina, although its presence extends beyond the state. The organization hosts events across the country and plans to open new offices in Colorado and Virginia.

Getting start-ups off the ground

One of the RIoT economic development programs, the RIoT Accelerator Program, connects entrepreneurs with partners in their industries and provides them with access to prototyping tools and other resources.


The accelerator is currently in the eighth cohort. Snyder said RIoT was targeting underrepresented groups in selecting startups to participate, and about 60% of the businesses involved were run by women, minority groups and veterans.

Since 2014, the companies participating in the accelerator have created more than 200 jobs, generated more than $ 100 million in revenue, and earned millions in grants and venture finance, he said.

Expanding the accelerator to support more startups is one of its goals. The accelerator should be offered in several cities by the end of 2021, said Snyder.

“We can provide you with this equipment to build your new connected device, perform the performance tests on the front end, run the regulatory certification tests on the back end, and get it to market,” he said.

RIoT works with government and corporate partners, including Cisco and SAS. Snyder said the organization is always on the lookout for new people willing to join the business community.

“We want Raleigh to be the place everyone in the world who wants to participate knows that when I come here I can find the partners I need to be successful,” he said.

Make Raleigh the center of the “data economy”

RIoT worked with Raleigh and the surrounding communities on a data-centric rainwater management project.

Working with local startup GreenStream Technologies, they used water level sensors to better understand water movement and predict when a road needs to be closed before it is flooded, or to dispatch emergency responders before the flood reaches an emergency level.

Snyder said Raleigh did a good job thinking about how to make data collected at the city level accessible – and has the potential to become the “data economy center of excellence.” The processing and measurement of data depends on the advancement of artificial intelligence, augmented reality and automation technologies.

Through programs like RIoT Your Reality and the Water Management Project, Raleigh serves as a test bed to experiment with new ideas and technologies.

“If we can do that, not only will we solve the needs of the city so that they can focus on their day-to-day business, but we will also create jobs if it’s a local company that meets those needs here in the community,” said Snyder.