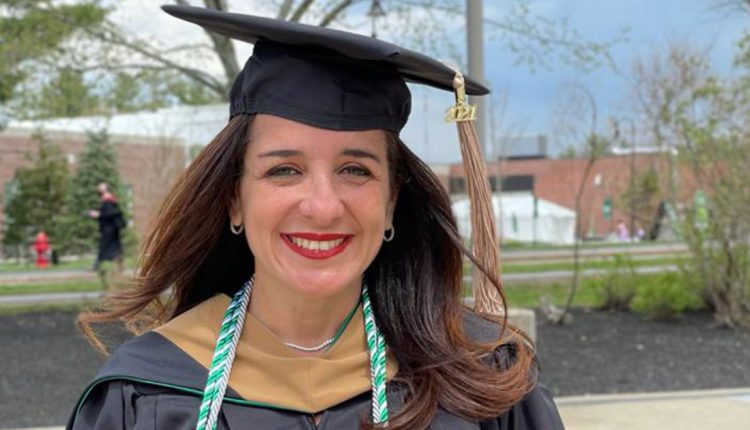 To graduate, Nathalya Mamane MBA’21 had to overcome a number of hurdles.

First of all, she is the mother of four children, two of whom are in middle school. Being a mother is an all-encompassing job, and Mamane wondered if she had the time and energy it would take to be a student again.

Then there was the pandemic, which added further uncertainty as Mamane wasn’t sure how distance learning would play out for both her children and herself.

Perhaps most dauntingly, Mamane was plagued by doubts about her academic qualification and wondering if she could cope with the rigor the Babson MBA required. “I generally didn’t think I was smart enough to close this deal,” she admits.

Filled with concern, Mamane did what she always does – she went step by step. She tried to convey this “roll-with-it” attitude to her children and customers of her event company. When they are worried about the future, Mamane tells them not to worry about potential problems that may never happen. Just go ahead and deal with problems that arise. “We will cross this bridge when the time comes,” she says.

This approach has served Mamane well at Babson. “I just wanted to survive. That was my whole premise until my last lesson, ”she says. “You take it one day at a time and hope it works.”

It definitely worked for Mamane, as she was named top of the year in her class in the One-Year MBA program. “I couldn’t believe it,” she says. “When my name was announced I thought there was no way.” She was also named to the 2021 Best & Brightest MBA list by Poets & Quants and is working on an entrepreneurial project that she hopes will help alleviate the stress associated with common medical harassment in children.

Mamane’s steadfast attitude is the perfect complement to the entrepreneurial mindset required to run such a business. “We’ll see where it goes,” she says. “I look forward to it. I’m passionate about that. “

Mamane longed to do her MBA for years. “There was something that made me want to learn,” she says. But then she started a family and the children kept coming back. “One became two, two became three, and three became four,” she says. “I always thought it wasn’t the time.”

She had also started a busy event planning company, NM Events, which enabled her to have a successful career.

Then everything changed a few years ago when Mamane was faced with a family tragedy. It was a challenging time and it made her think about the direction of her life. She thought of her business and she thought of her dream of an MBA. And she thought about how she wanted to have a deeper impact on the world around her. Through her company RST, Nathalya Mamane MBA’21 is pursuing a home test for streptococci. RST is now participating in Summer Catalyst, an accelerator program produced by Babson’s Arthur M. Blank Center for Entrepreneurship.

“I had so much energy and passion to change the world,” she says, “and I went to parties. Event planning isn’t bad. I was good at it. The customers loved me and kept coming back. “

But being an event planner felt limiting to Mamane. “When I was an event planner, I thought that was the only way people saw me, and that was the only way I saw myself. I thought that was all I could do,” she says. “I realized I didn’t want to do it anymore.” The time for Mamane to pursue the long-awaited MBA had finally come. “I needed personal growth. I wanted to learn new things, ”she says. “I had to learn something that makes powerful things happen.”

Mamane was drawn to Babson’s entrepreneurial spirit. She started with a Certificate in Advanced Management in college and found that after graduation she was still hungry to study and moved on to the MBA.

Being a mother and a student made for a hectic life. For example, Mamane might be having class one night and discover that she has not yet prepared dinner for the family. “Things got really challenging,” she says. “I shed a few tears. I wasn’t calm and happy all the time. ”She is grateful to her husband and children, who are 13, 15, 21 and 23 years old, for their support. “My son is a great laundry folder. My daughter can bake anything, ”says Mamane. “At the end of the day everything will work out.”

Whatever the future holds

Mamane had no specific plans when she signed up with Babson. She knew she wanted to turn away from event planning and is now in the process of going out of business, but she is open to the future.

Mamane had many memorable learning experiences at Babson, such as helping Cheryl Kiser of the Lewis Institute for Social Innovation deal with the pandemic or working with Sinan Erzurumlu of the FutureLab on Mobility to address the issue of social isolation in older adults.

“I needed personal growth. I wanted to learn new things. I had to learn something that makes powerful things happen. “
Nathalya Mamane MBA’21

Her company grew out of an opportunity that she and her fellow students introduced to Johnson & Johnson with a product idea. The idea was for a home test for strep. Usually a strep test is done in a doctor’s office, so testing at home could be a huge time-saver for parents. “I’ve been to the doctor a million times for a sore throat,” says Mamane. “It’s ruining my day.”

Fascinated by the potential of the idea, Mamane continued to pursue it. Your company, RST, is participating in Babson’s Summer Catalyst Accelerator program this year. However, Mamane is realistic about the future and whether such a home strep test can ever become a reality. “It’s going to be a long way,” she says.

Whatever the future holds, Mamane knows Babson will be there. Grateful for her MBA, she wants to find a way to support new students. “I have so much love and appreciation for Babson,” she says.

Posted in Campus & Community, Entrepreneurship of All Kinds